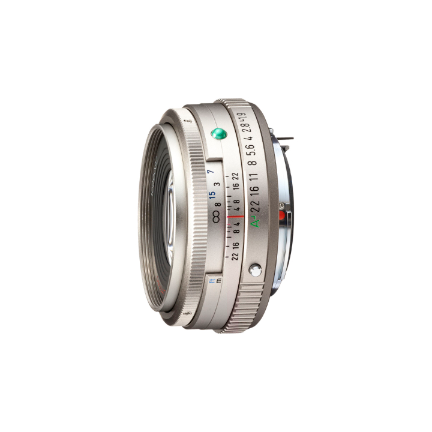 This standard lens has a 43mm focal length, which is equal to the diagonal length of a 35mm-film image area. Its unique focal length captures the image as if seen by the human eye, and produces a natural sense of depth as observed by the naked eye.

To make the most of the slender lens barrel, this is the only model in the Limited lens series to feature a detachable, screw-in lens hood. Its compact dimensions assure outstanding portability.

In addition to the acclaimed optical performance of the smc PENTAX-FA 43mmF1.9 Limited, this new lens features the PENTAX-original HD coating and a round-shaped diaphragm to further upgrade its imaging power. It also provides a mount pointer with a shippoyaki (cloisonné) finish to standardize the exterior design of the new-generation HD FA Limited series, and also to facilitate the lens-mounting operation.

To optimize “sensibility” — one of the main design concepts of the Limited series — PENTAX paid the utmost attention even to the details that can’t simply be measured in numerical terms, to improve the imaging power of this new lens. Newly applied to the first optical element, the SP coating improves the water/grease-repellent and scratch-resistant performance, while enhancing ease of maintenance.

To make the most of its slender lens barrel, this lens is the only model in the Limited series to feature a screw-in lens hood. Thanks to its extremely compact dimensions, it assures outstanding portability. A newly added mount pointer lets the user effortlessly and quickly mount the lens to a camera body, while accentuating the exclusive exterior appearance of the HD FA Limited series